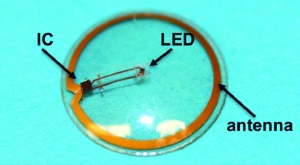 Do you always check information on your mobile phone from time to time? In the near future, perhaps this will all become redundant: Scientists are developing a new type of contact lens technology that can map information directly onto the human retina. This is absolutely Terminator-level cool.

Recently, an international team of engineers has successfully developed prototype prototypes, which are specially designed contact lenses. The team tried to put an LED lamp made of sapphire in the contact lens, built-in a receiving antenna, and used an electric circuit (IC) to connect the antenna to the LED lamp. Through remote transmission, the team has been able to control every pixel on the LED light. However, our eyes need to focus on objects beyond a certain distance in order to focus effectively to see objects.

Engineers quickly found a way to deal with this problem: They installed an extra lens in it and successfully achieved the focus of the image. Once the entire equipment has been successfully developed, engineers will begin the testing phase. The entire system has been developed and tested on rabbits and eventually succeeded, demonstrating that it is effective and safe. Once this device is successfully developed and used, it will have almost the same function as Schwarzenegger's eyes in the movie terminator. Imagine that you will be able to read text directly in your eyes and check your e-mails, not to mention the impact that this technology will have on the navigation driving and gaming industry.

In spite of this, the development of this equipment is still at a stage of development, and there are still many deficiencies and problems that need to be solved. Since the lens of the contact lens is made of a hard plastic material, it can only be removed after wearing for a few minutes because it will hinder the air circulation on the surface of the eye. And when in use, the remote control must be effective at very close distances. Researchers say they may be at least 10 years away from the final development, but they think that this time will be more than enough to solve these problems. In addition to solving remote control issues and focusing issues, they also want to improve the materials used in contact lenses to make them softer and more comfortable to wear.